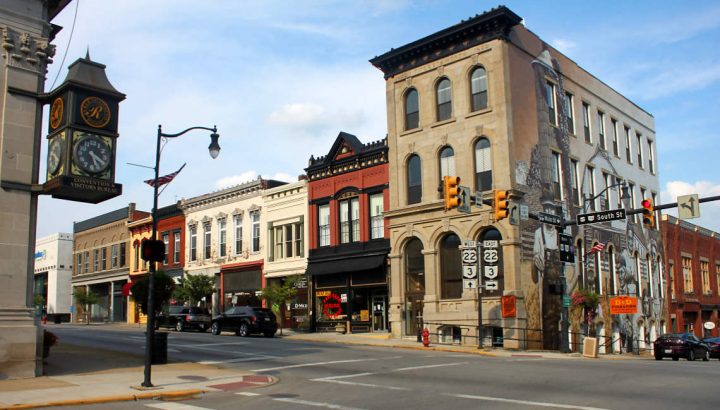 On the face of it, Wilmington is the perfect postcard of »small town« America. It boasts a historic theatre that has been renovated so meticulously that it’s been used as a movie location for several films including, »Lost in Yonkers«. It’s twelve thousand plus inhabitants enjoy fresh air, wide open spaces and a cornucopia of various Monopoly sized houses for nearly every family. Slightly more than half of the population of United States lives in towns, villages and boroughs of approximately this size, meaning places with less than 25,000 people.

After having lived in major cities and abroad for my entire adult life, I was curious to see what the attitudes of my fellow school mates would be after so many years away. After all, this was my sojourn »home« for my 45th school reunion, and I was full of trepidation. Not because I was worried if the town had changed, if I would remember everyone’s name or because we were officially now »old«. I was really on edge because I was stepping into »Trump« country.

Having said that, I’m sure it’s obvious that I’m not a Trump supporter. At the time of the last election, I was living in Chicago, Illinois. A heavily Democratic city, no one ever believed that Donald Trump would be nominated as the Republican candidate, let alone elected. We were living in a liberal minded bubble. And on November 8, 2016, our bubble burst. Never could I remember an election so emotionally charged. And never could I recall a time that people were so furious and disenchanted with the results. Between the demonstrations and the charged atmosphere, when we moved to London last summer, even though I missed my family and friends, I felt it relieved to be away from the Trump media circus.

On the six-hour drive from Chicago to Wilmington, I thought about how many of my fellow classmates had posted pro-Trump slogans and videos from Fox News on their Facebook pages. I saw them happily wearing Trump baseball hats and sporting T-shirts that said, »Make America Great« In short, I felt like a fly crashing into a spider’s web.

The first stop I made was to one of my dearest friends, Michele. An artist and sculptor, her house was a haven of culture and sensibility.

The next day I wandered down to the afore mentioned historic theatre that a fellow classmate manages. She proudly told me that Michael Moore, the famous documentary director, came to Wilmington in October of 2016, to tape a program of political humor. When the show was announced, the theatre came under vicious attack from the public and the media. A state senator even called down from Columbus, the state capital, threatening to pull the arts funding for the theatre which is a non-profit organization. However, the show went on as planned. In bright red letters on the marquee was the announcement, »Live and in Person- Michael Moore Tonight- Trump Supporters Welcome«.

Later that evening, as I walked into the reunion, I decided to find our why so many of these hard working and decent people could vote for this megalomaniac. So, I did something I promised myself not to do. I sat at a table and asked, »How many of you voted for Trump?« After a moment’s pause, 7 out of 8 people’s hands shot up. »Do you mind me asking why?«

Debbie, Kay and Lois, sitting at the next table, overheard me and waved me away. »Not getting into that conversation«, they laughed.

»I did the research«, said Doug, a farmer. »After the crash in ‘08 our country never recuperated. The austerity programs the government launched only helped out their friends and cronies. Not us.«

»And who got sent to jail from the banks?« asked a nurse named Jane. »No one!«

»It’s the foreigners fault«, said Bruce, an auto worker. »Kick’em all out.«

»We needed change!« bellowed Bruce’s wife, Shirley. They all continued yelling across the table about things you hear daily, lost jobs, poor working conditions, health care, low wages. And I realized that the very people economically hurt the worst believed in him the most. It’s the idea that if something is repeated enough, it slowly becomes true. They believed not only in him but in what he promised.

Robert, a history teacher, turned to me. »Why Brexit?«

»Fake news«, Shirley said. »What about my pension?«

»I wanna keep my guns. My right to have them«, said Bruce.

»I want my grandkids to have a future«, said Jane. »And not heroine.«

Robert turned to me. »My students and I discuss government structures all the time. In fact, living in London you’ll appreciate this…«

»London? You live in London?« said a man with a very long, white beard. He paused and looked up to the ceiling. »Hmmm. Been to London, Ohio… once. Didn’t fancy the way they talked.« I didn’t know his name but thought he must be a relative of Rip Van Winkle’s.

»Anyway«, Robert continued. »According to the Resolution Foundation, based in LONDON, England«, he glared at Rip. Rip just shrugged and stroked his beard. »This is the longest period of time we’ve had declining income. Worse than the financial crisis that inspired Marx, worse than the Depression and worse than both World Wars.«

»Build the wall«, said Bruce. Shirley jabbed him in the ribs.

»I’m a Populist«, said »But a lot of farmers are. We think the government needs to regulate certain businesses, especially the railroads.«

»You city folk think we’re just country bumpkins«, said »But did you know that Wilmington is the first town in the U.S. to pass a law for ›green collar‹ jobs? Jane and Shirley slapped high five’s. »Called something like The Green Enterprise Zone. They offer financial incentives and funding. Look it up.«

»And you voted for Crooked Hillary?« Bruce asked. But before I could answer the Class President took the microphone asked for everyone’s attention.

»I’m happy to report that James Johnson is still alive!«

Shirley leaned over and said, »Here’s the story. They accidentally put Jimmy on the deceased list for the last reunion. Then found out that he’s alive and well.«

Jimmy stood up and did a fist pump. The room bursts into an applause.

I sat back in my chair and smiled. The world might turn on a shaky axis but it still turns. I didn’t find the answer I might have needed and I’m still very confused. But for the meantime, and Brexit be damned, I’m enjoying London, England.