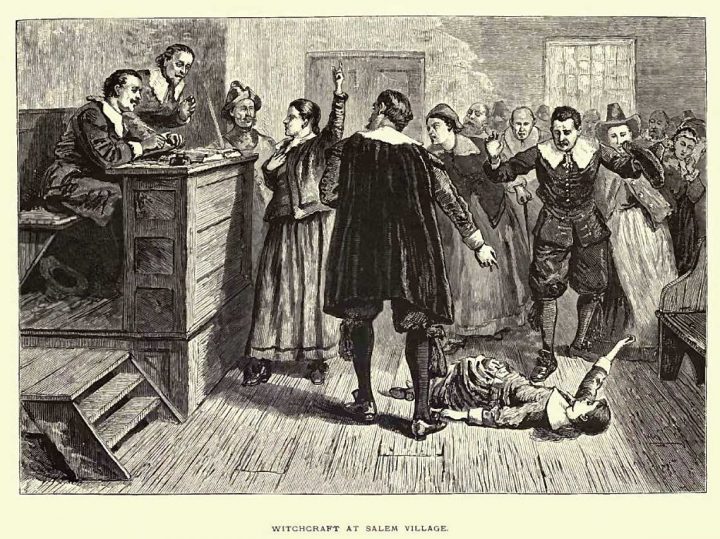 Who are today’s witches?

Sometimes, history does repeat itself. Unfortunately, not always in the best of ways.

Nestled at the mouth of the Naumkeag River, north of Boston on the Atlantic Ocean, Salem is still considered one of the most significant seaports in Puritan American History. Founded in the early 1600’s by English settlers, Salem was named after a word Hellenized from the Hebrew word for »peace.« However, by 1692, Salem was quite the opposite of a peaceful town.

It started when Abigail Williams, Betty Parris and their friends were playing with a Venus glass (mirror) and eggs. »Oomancy,« or divination by eggs, was first noted in ancient Greece and was highly popular in the late 1600’s – mostly by girls who wished to know the profession of their future husbands. A more sophisticated form of Oomancy happened when molten lead was dropped into a container of cold water from a height. The shapes that would form could be »read« by a wise person who understood what the symbols meant. That practice was modified by using eggs and cracking them into a bowl of hot water. The shapes the white albumen made worked in quite the same way.

What seemed a simple game wasn’t taken so lightly in many social circles. The Massachusetts Bay Colony, of which Salem was a northern part, was a hotbed of Puritanical theology. Many zealots left England and settled in New England as they were on a mission to »purify« the Church of England and its lax laws and tolerance to the Roman Catholic faith. One of their doctrines claimed that any death, death of livestock and human disease was the work of the devil and that many people quietly worked in agreement with him and his demons. Despite the fact that politics around this time was hugely chaotic, the Puritans still created a hysteria regarding witchcraft and not only instigated the judicial proceedings against the accused but compromised members of the court.

It is worth noting that these proceedings were also greatly influenced by the Puritanical movement that was been going on in East Anglia. Between 1644-1646, the celebrated witch finder, Matthew Hopkins, was responsible for the execution of nearly 300 alleged witches. Therefore, when Salem’s witchcraft trials began in 1692, maleficium, or sorcery, was greatly feared. Because of this agitated atmosphere, 20 people, 14 women and 5 men, were executed in Salem.

Judge John Hathorne, also known as »The Hanging Judge,« was the best known of the witch trial judges. According to transcripts that still exist today, he openly believed the accused were guilty before the trial even began.

And keeping it all in the family, the famous writer, Nathaniel Hawthorne, author of »The Scarlet Letter,« and »House of the Seven Gables,« was the great grandson of John. It is reported that Nathaniel, deeply ashamed by his ancestor’s lack of remorse in the witch trials, changed his name by adding the »w« to try and distance himself from its legacy.

Additionally, Judge John Hathorne is prominently featured in the famous book, »The Devil and Daniel Webster,« written in 1936 by Stephen Vincent Benet. A tale about a New Hampshire farmer who falls on hard times and ends up selling his soul to the devil, it was originally published as a short story in the »Saturday Evening Post.« »Mr. Scratch« aka The Devil, gives the farmer seven years of prosperity in return for his soul at the end of his »contract.« When the seventh year is nearly upon him, the farmer flies into a panic and hires the lawyer and famous orator, Daniel Webster, to try and nullify the deal. In a classic David and Goliath moment, the eloquent Webster is able to find a loop hole in the devil’s contract and sets the farmer free. The story, which won an O. Henry Award, was so popular it was made into a folk opera, two movie adaptations, and later released as a book. It’s morale: »Mankind got tricked and bamboozled by the system, but life is still a great journey,« still resonates today.

Nearly a hundred and fifty years after the Salem witch trials, Arthur Miller’s play, »The Crucible,« was a direct response to the tense era of McCarthyism which reflected the mass cultural and political hysteria around Communism. Using the Salem Witch Trials to illustrate his point of government misinformation and propaganda, The Crucible still is performed around the world as a reminder of how the public falls prey to fear and mistrust of the unknown.

And what of sleepy little Salem today? A town of approximately 40,000 people, it has taken an unsavory past and embraced its history. It’s local high school is named, Witchcraft Heights and its athletic teams are called, The Witches. It hosts: A Witch Museum, a Witch Dungeon Museum and a Witch House; also known as the Jonathan Corwin House. Corwin was another notable judge during the trials and his house, built between 1620 and 1640, is the only original building with direct ties to the Witch Trials left standing.

With a history such as this, what happens in Salem during the fall? Well, apparently a lot. Over 500,000 people from around the world visit Salem during its Halloween festivals, nearly half of its total tourist quota for the year. Parents and children participate in trick or treating, enjoy live music shows, the farmer’s markets and numerous other seasonal events. But if Nathaniel Hawthorne, with a »w,« were alive today, he might be shocked at how time has not only mended Salem’s wounds, but has allowed a new sensibility to take hold and flourish.

Today, we might not worry as much about people with magical powers; the last »witch« was brought to trial in England in 1944, arrested under the now defunct 1735 Witchcraft Act. She was imprisoned for nine months as it was decided she was a fraud. After her trial, the 1735 Act was overturned and in its wake, the 1951 Fraudulent Mediums Act was created. The last witch trial in America was in 1918. The man was accused of exerting »mental control« over others. The case was dismissed. But it is notable to add that it happened in Salem, Massachusetts.

So, who are today’s witches? What religion, nationality or guise do they take? As witnessed, the world still fears and persecutes. Society still judges and cowers when accepted norms are breached. And mass hysteria seems only a few short ticks away.