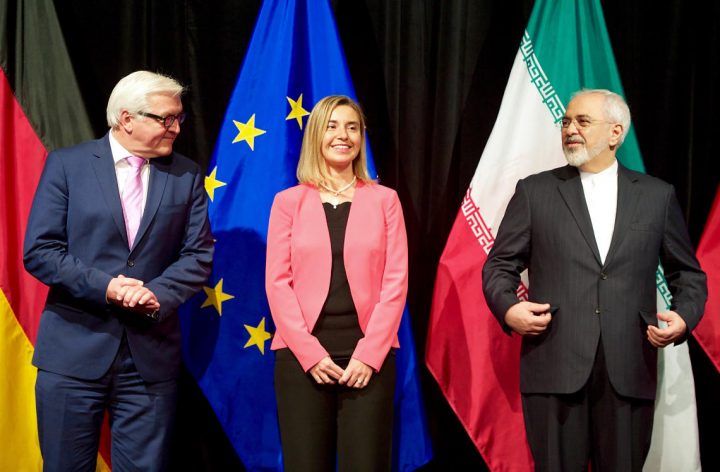 Europe with Iran, Russia, China against the USA

Europe is joining forces with the two most powerful authoritarian regimes in the world against the US in order to continue doing business with a dictatorship. How does this fit in with those highly praised »European values«?

»What right does Trump have to forbid European companies from doing business with Iran? Just because a treaty signed by America doesn’t suit him? Where will that lead to when sanctions are imposed on allies?«

My neighbor was visibly indignant after a lecture by Prof. Hal Brands on the »American Grand Strategy in the Age of Trump« at the Vienna National Defence Academy when talking to me about America’s relationship to Europe. He wasn’t the only participant who was critical of Trump’s cancellation of the »Iran deal« – which, by the way, was not signed by anyone, but is merely a declaration of intent.  »Pacta sunt servanda« was the unanimous tenor in the auditorium.

After the collapse of the Soviet Union and the reunification of Germany, the path to a golden age seemed preordained for a brief historical moment. Francis Fukujama proclaimed the »end of history« and was convinced that the principles of democracy and market economy would soon prevail everywhere. Even though Samuel Huntington’s thesis of the »Clash of Civilizations« was closer to reality, the United States is still the world’s military and economic leader and global patron of the concept of liberal democracy. But the challenges posed by authoritarian regimes are growing. Under Putin, Russia once again claims its role as a world power. China is rising from an economic superpower to a political and military one. And on the brink of this development, authoritarian leaders like Erdogan are establishing their own countries as dominant regional powers.

If, in a nutshell, one regards the world as a stage of rivalry between liberal democracies led by the US on one hand and authoritarian regimes led by Russia and China on the other, the question arises: on which side is Europe? With the examples of Iran and Israel: too often on the wrong side.

The Vienna Agreement has further destabilised the Middle East and is vehemently rejected by almost all the major players in the region. It paves the way for Iran to become a nuclear power by 2025, promotes its military expansion and indirectly finances terrorist attacks in Israel and Europe. »Bad deal«, as Trump calls the Iran deal, is an understatement. This deal is not just bad, it is suicidal.

Eighty thousand Iranian militiamen are stationed in Syria; in Lebanon Hezbollah is bursting with weapons. Militarily, only Israel stands between the religious-fascist regime in Tehran and its rise to dominate in the Middle East. In the meantime, suspicion has hardened that Iran is secretly continuing work on its nuclear program. But the Israeli Prime Minister’s warnings are deliberately ignored by the Europeans and the International Atomic Energy Agency.

Iran is not only striving for dominance over the Middle East, the export of the Islamic Revolution to other countries by terrorist or political means is one of the ideological pillars of the regime. The Islamic Republic subordinates all religious differences to this vision and also supports Sunni terrorist groups such as Hamas or the IS. The largest terrorist financier in the world supports almost all Islamic terrorist gangs that have committed themselves to the fight against the West and the annihilation of Israel.

Since the gradual lifting of sanctions, almost sixty billion dollars have flowed back to Iran from frozen accounts in the USA alone, in addition to billions of dollars in revenues from oil sales. Without these sums, Iran would not have been able to finance expansion of its sphere of influence. Nonetheless, Europe desperately sticks to the nuclear agreement.

The hypocrisy of Europe

Together with Russia and China, Europe is working on a »Special Purpose Vehicle« in order to carry out exchange transactions with Iran outside the international financial system. According to EU Foreign Affairs Commissioner Federica Mogherini, »legitimate financial transactions« with Iran will thus remain possible.

But there is nothing legitimate about strengthening through active trade relations the »leading state sponsor of worldwide terrorism as well as of deadly anti-Semitism and Holocaust denial«, said Josef Schuster, President of the Central Council of Jews in Germany. There is nothing legitimate about forming alliances with the two most powerful authoritarian countries in the world against the decades-long protective power of European democracies in order to be able to do business with dictatorships undisturbed. There is nothing legitimate about betraying the »European values« invoked at every opportunity for short-term industrial interests. And now all those who otherwise chant »no blood for oil« at every appropriate and inappropriate opportunity are remarkably quiet.

Moreover, the desperate adherence to the Iran deal is useless. My questioner, however, was wrong: the USA does not forbid European companies to do business with Iran. They couldn’t do that. Rather, the Europeans have a choice: to do business with Iran or the USA. That choice shouldn’t be difficult, especially since European trade volume with Iran is far below expectations. Any sanctions will mainly affect Europe’s carmakers, airlines, oil and technology companies and banks. Companies such as PSA (Peugeot, Citroën) and TOTAL have already consequently ended their activities in Iran.

So far, the European Union hasn’t maintained an unblemished track record in regard to honoring treaties. Within the EU, the right of the strongest applies. When German Chancellor Gerhard Schröder and French President Jacques Chirac suspended the Maastricht Stability Pact in 2003, sanctions as contractually agreed upon, didn’t kick in. With a simple »Maastricht doesn’t interest me«, the German Chancellor ignored with impunity exactly those provisions of the Stability Treaty that Germany had insisted on when introducing the euro.

To this day, agreements in the EU are valid as long as they do not conflict with the vital interests of its largest members, from the no-bailout clause to Schengen. And strangely, the mullah dictatorship suddenly awakens Europe’s love of unconditional contractual compliance? What obscene hypocrisy.