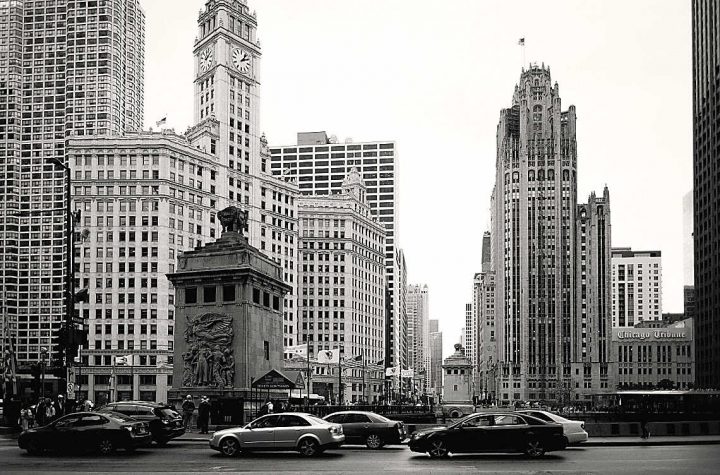 The Wild, Wild, West of the Midwest?

»Aren’t you afraid?« a British friend, Jenny, asked. »Spending a month in Chicago?«

»Why should I be afraid?« I said pretending not to know what she’d say next. »What would be the problem?«

»The shootings!« she yelled as if speaking louder would make the situation more dramatic. »The crime!«

Having just spent the past 15 years in Chicago, I guess I wasn’t sufficiently alarmed to suit her. Out of Chicago’s long list of celebrities such as: Michael Jordan, Oprah Winfrey, Cindy Crawford, John Malkovich, Hillary Clinton, Harrison Ford, and Kanye West; Al Capone still might be The Windy City’s most famous spokesperson. And even he might be a bit shocked at how things are shaping up. But truth be told, when you are there, it seems to be business as usual – except of course for the days it isn’t.

This past summer, over a three-day weekend in August, a total of 75 people were shot, which included 13 fatalities. In response, Chicago’s famed Lake Shore Drive was shut down by protesters expressing their outrage over the endemic gun problem and demanding the resignation of both the mayor, Rahm Emanuel, and Police Superintendent, Eddie Johnson. Emanuel, who recently stunned the city by announcing he is not running for re-election this coming February, hired more than 1,100 new police officers last year. Johnson blames the violence on gun laws that aren’t stringent enough and asked for more help from the communities. But as well intending as that might be, the communities don’t feel particularly trustful of the police and the corruption that has plagued both the department and city hall over the past few years.

Social activist and Roman Catholic Priest, Rev. Michael Pflegar, who has tirelessly campaigned for the rights of the racially and economically oppressed South and West Side, called the city a »disaster« and lambasted President Donald Trump for not delivering on his campaign promise to help the city curtail its violence. He suspects that Trump only wants to embarrass his predecessor, former President Barack Obama, because Chicago is his hometown.

A city known for its upscale steak houses, deep dish pizza, lively music scene and friendly Midwestern people might seem to be an uncharacteristically strange place to have one of the highest murder rates in the country. Additionally, Chicago’s South Side is a fascinating and diverse neighborhood. Home to the prestigious University of Chicago, the Museum of Science and Industry, Chinatown and some of the cities’ best jazz and blues clubs, on a sunny day with Lake Michigan looming in the background, the neighborhood looks like a bucolic place of culture and affability.

But dig deeper into the socio-economics of the two areas that seem the most troubled and you uncover a fractured past.

Both the South and West Side have lower incomes than the rest of the city, double digit unemployment levels, underfunded schools and a lack of development. However, there seems to be a difference, even within the two areas. The West Side, predominately Hispanic, are more focused on organized gangs with an emphasis on making a profit from its seemingly never-ending drug supply. It has largely filled the void that was dominated by the Italian Mafia that once dominated the city in the 50’s and 60’s. Thanks to the RICO act, (Racketeer Influenced and Corrupt Organizations), which helped clean out a vast majority of the syndicate operations, a large void became available which was largely filled by the gangs. In comparison, the South Side, predominately African American, is less »organized« with a strong emphasis on gang wars over »turf«, including honor killings that feature street gangs who open fire in the middle of the day, taking the lives of innocents along with their intended targets.

In 2016, even though the homicide rate in the United States neared a historic low, Chicago saw over 760 people killed, a two-decade high.

The University of Chicago published a report in 2017 that believes that the lack of arrests following violent crimes may play a role in the worsening cycle of retaliatory violence. Statistically, this theory seems sound. The Chicago Sun Times newspaper reported that only 17.5% of all murders were solved last year.

Many critics point fingers at the discrepancy in guns laws that vary state to state. The Law Center to Prevent Gun Violence have developed a point system that measures the strengths of all 50 states’ gun laws. Although Illinois ranks high in strict gun control (they rate a B+), bordering states such as Indiana (they rate an F or Failing) and the nearby state of Missouri (also ranks an F), suggest the possibility of a steady stream of weapons that can cross state lines without question.

Additionally, the inequality in areas with violence tell a vivid story: 35 per 100,000 people on the South Side of Chicago while the downtown area and North Side enjoy one of the safest areas to live in the country, with 1 in 100,000 murders per year.

When you live in Chicago, you are well aware what goes on in the city you care for. You are well aware that just a few miles away someone is driving down the street with an automatic weapon waiting for a rival gang member to show up on their street corner. Therefore, you do what you can to help, to organize, to donate or simply by trying to make political change. And even though you might look over your shoulder more often, double check the locks on the door more often or worry about your children returning safely at home each night, you realize that what can be done is largely out of your hands.

So, when someone looks at me wide-eyed and frightened when they mention Chicago, I shrug. Because for better or worse, it is still, as John Belushi and Dan Aykroyd aptly called it, Sweet Home Chicago.