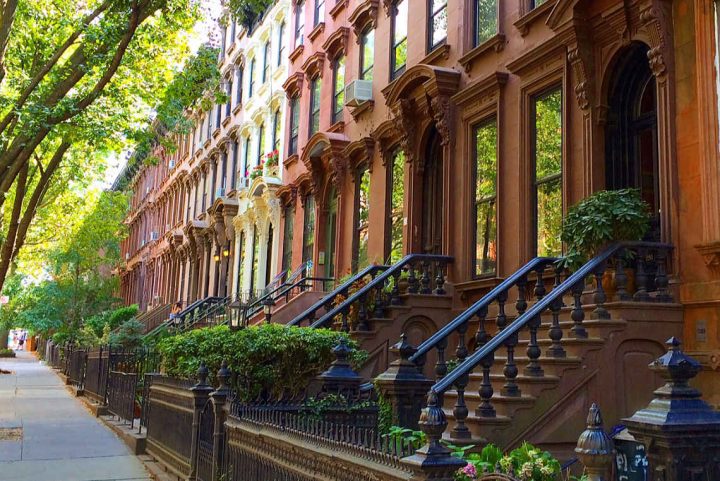 »Did we actually win the war?«

Erich and Hanna have a small apartment on the second floor of a narrow brownstone. Each floor of this single family home was converted many years ago. Today, it’s not so easy for the two of them to climb the steep stairs. A lawyer lives above them with his girlfriend. He often works late into the night. A family with two children occupies the apartment below them. The man is a policeman, the woman a nurse. They have the largest apartment and have use of the small garden in the back.

Erich and Hanna moved here from Vienna many years ago. They got married on the crossing from Lisbon to New York. Erich worked for many decades as an editor in a publishing house and was responsible for German-language literature. Hanna translated books from German into English. Literature and old books have always been their passion.

Now Erich tries to enjoy his retirement. He celebrated his seventy-eighth birthday this year. Hanna is five years younger.

They regularly receive invitations from the Austrian Embassy to events such as recitals, film screenings, exhibitions and lectures. The Cultural Department of the Embassy seems particularly to care about topics that have to do with Judaism. Erich and Hanna like attending these so they can live a little in the past. But this time is different. They’ve received a card for a reception on the occasion of the fiftieth anniversary of the end of the war.

Erich has decided to wear his black suit and Hanna a long, dark blue dress. In the early evening they are both ready but still can’t decide whether they should go.

Erich looks at the cuckoo clock above the kitchen table where they like to sit most of the time. »Hanna, it’s getting late. We have to make up our minds!«

»What are my alternatives?«

»We can stay home or go. I can’t think of a third possibility, unless we go to the movies and forget about this evening.«

Erich laughs. »But they lost the war. We can celebrate that.«

»It wasn’t always easy for them, especially in the years after the war.«

»What, do you feel you must protect them? Do you think they need that?«

»No, they don’t need my protection, not even my pity«, says Erich. »But I’m old, and I’ve had enough of the memories.«

»I’m no longer young either, but I’ll never forgive them!«

Erich braces himself and leans forward. »I know. I’ve heard it a thousand times. Are we going? At least we could enjoy the buffet…«

»The way they brought us out of the basement. The light burned. Like when I was a child and got soap in my eyes… The noise in the house, at first I thought it was the SS, and then it was the Russians.«

»Two years living in a basement… who can even imagine that today?«

They are silent for a few seconds. Hanna fumbles for Erich’s hand across the table.

»That last day, remember, that last day? Mrs. Werner, she always brought us food and water, she didn’t come for two days. You wanted to go upstairs, but I was scared and persuaded you to wait. The water ran out, there was no more bread, we hadn’t emptied the bucket for days, it stank so terribly down there. I was sure we were finished…«

Erich squeezes Hanna’s fingers. »We were covered with old rags and always waiting. I was sure everything was lost, all those months spent in the dark«, says Erich.

»And when I held you back, then you suddenly wanted to, in this situation. For weeks you didn’t touch me, but then suddenly…«

Erich smiles. »I thought it would be the last time…«

»We were still so young. Every time was like a last time… In that basement there… We were the last ones, all the others dead… We were allowed to survive, enjoy that last day… And then the first one, the first one right after the last…«, Hanna fights back tears. »Why us? Were we better people?« she says slowly.

»The Kleins dead, both starved, the Rosenberg girl dead, died from a simple diarrhea, Fried dead, hanged himself, the two brothers Grün dead, they ran out of their hiding place because they couldn’t stand living in a dark hole anymore –«

»Stop « Hanna interrupts him and puts her hands over her ears. »And what did we survive for?«

»We survived for our Thomas… And then… and then…«

»Stop it, Hanna, I don’t want to talk about that!«

Erich waits for a moment as if he had to think about it. »Just about fifty.«

»His life was probably created on the last day of the war, and ended a few decades later senselessly«, says Erich quietly.

»He was not even killed by a German… Somewhere in a jungle… Oh, Erich, tell me, why have we survived?«

»How should I know?«

»If only we had remained in Europe after the war, Everything would have been different. Today we would be playing with our grandchildren…« Hanna sobs softly. »Why couldn’t we hold Thomas back?«

»He felt like he was an American, and remember, he was conscripted. There was a draft.«

»Ha – American – what a crock! Such a stupid death, so pointless.«

»I always wanted to go back«, Erich says.

»I know. Can you remember the architect? He was at our home a few years after the war. He fled in ‘37, for political reasons. You asked him if he didn’t feel homesick. ›Homesick? I’m not a Jew!‹«

Erich laughs. »I know, I know, I remember it well. That’s just how we are. Tell me, Hanna, did we actually win the war?«

»Someone must have won.«

»We were liberated, we survived, but not as great victors.«

»I don’t know. Maybe the Americans, but Thomas was an American! And what did that get him? What did it get us?«

»Do you remember, back then, on that last day, when they pounded against the iron door? We thought about hanging ourselves.«

»Yes, we came within a hair of it, and so close to the end. ›They’ll never catch us alive!‹ You always said that.« Hanna gets up and takes a glass out of the cabinet. »Would you also like a glass of water?« she asks Erich. »Above us, they slept in beds with white sheets and pillows. And for breakfast there was milk with honey.« Hanna fills the glass with water and puts it on the table. »That’s why I still hate them today. Unfortunately, because I would be glad to find some peace. I couldn’t even sleep that first night we were free. So many were dead, kidnapped, disappeared: my parents, your mother, your two sisters, my uncles, two aunts, all gone… Just the two of us, we’re still standing on this planet fifty years later.«

»Should we really have stayed in Vienna? Would Thomas still be alive? Hanna, have we both lost the war?«

»I don’t know. At least we are still alive!«

»You never got the apartment back.«

»I got nothing back! Instead, they invite me to Vienna now for a tour in a horse-drawn carriage. Fifty years later! With the same money they stole from me, I could buy the whole team of horses and the fiacre to boot!«

»And the poor woman, Mrs. Werner, who hid us, what good did it do her?« Hanna says.

»The contempt of the other tenants. She died in her apartment two years later, and for a week no one noticed.«

“All the same, a shit people, hypocrites with  big mouths.”

»If we go now, they will tell us how much they lack the Jewish intelligentsia, the Einsteins, the Mendelssohns, the Freuds, the Kafkas, etc. They have never regretted the fact that they murdered Jewish workers and artisans«, said Erich. »The worst is when they start whining: The terrible past, how sorry they all are!«

»Calm down, Erich. It doesn’t make any sense for you to get so upset.«

Erich goes into the living room. A large mirror is on the door of an old cabinet. Erich stands in front of it and looks at his reflection. Hanna comes and stands beside him.

»How emaciated we were then! Down to the bone. Old rags full of lice. Eyes blood red. I looked like an old man. You like an old woman. We were ashamed that first day. There was no joy. We had been two young beautiful people everyone admired, the most beautiful couple on the street. What had they done to us?«

Hanna seeks Erich’s hand again. »A year later, here in New York we were the most beautiful again.«

»On the outside, maybe, but here in my stomach the rat from the basement is still gnawing!« Erich looks at his watch. »And we have missed the buffet!«

Translated from German by John Howard